The European elections in the North

At 7am tomorrow morning the polling stations will open in every town, village and neighbourhood across the North for the elections for the European Union parliament – elections that nobody expected to see happening in circumstances of Brexit being completely unresolved.   What’s in store? 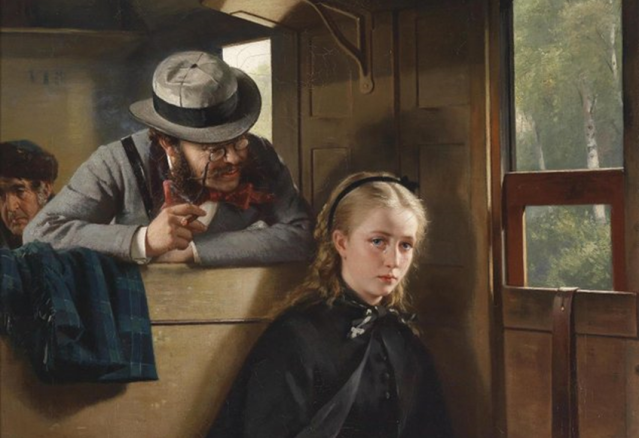 At the weekend Best for Britain, the marvellous anti-Brexit campaigning organisation that Northern Umbrella identified last July as a cut above the Peoples Vote campaign, did something that not a single mainstream media organisation had hitherto bothered to do: it published an opinion poll that actually gave numbers for each region of England, the regional constituencies which form the basis for the MEPs getting elected. It also published the numbers for Wales and Scotland.

Suddenly – lo and behold! – we discover that the SNP is not bumping along at 4%, as the BBC and the newspapers were reporting, it is polling at 38% in Scotland, 18% ahead of all other parties: on course for a huge victory.  And of course, at 0% in England and Wales.

Almost as sensational is the reveal that Plaid Cymru is the second-placed party in Wales at 19%, four points ahead of Labour, albeit miles behind Nigel Farage’s Brexit party which is polling at 35%.  In case you missed it being reported in the BBC news, Adam Price, the erudite new leader of Plaid Cymru, is now pushing for an independent Wales inside the EU.  Quite a turnaround in Wales, where outright independence was rarely seriously considered.  But this is the impact of the Little Englanders’ Brexit.

So what were the poll findings for the North?  Here are Best for Britain’s numbers as adapted by Northern Umbrella from Brexit Factbase (links provided in the discussion section below): 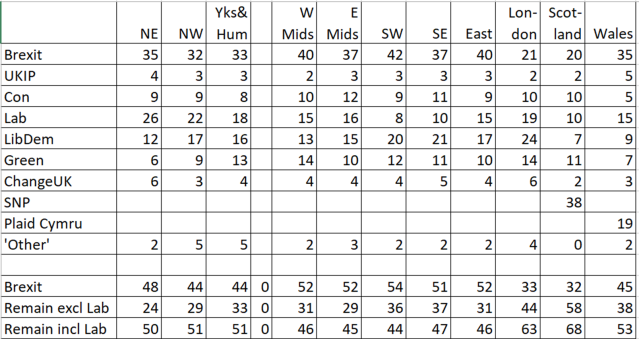 There are some straws of good news we can clutch at: the main one being that it appears that Northerners appear to be less taken by the Brexit Party than any of the other regions of England outside London.  In the North East they stand on 35%, in Yorkshire 33% and in the North West, 32%.  This compares with Brexit party support of 37% in the South East and East Midlands, 40% in the West Midlands and East of England, and a scary 42% in the South West.

But it’s a straw to choke on really: the Brexit party is in a big lead in all three regions of the North – a lunatic situation to be in on a day when Brexit has killed off Scunthorpe steelworks after 150 years, and most likely taking Skinningrove in Cleveland down with it.

The 64 million dollar question of whether the combined vote for pro-Brexit parties exceeds the combined vote for anti-Brexit parties depends entirely on how you classify support for the Labour party.  One thing that the numbers show quite clearly is that there is no majority in the country as a whole for a hard Brexit.  That at least is good news.  But there is no obvious majority for Remain either.

What this shows, perhaps above all else, is that a vote for Labour in this election is a vote for letting someone else interpret what your vote means in terms of your position on Brexit.  Len McCluskey and Ian Lavery will interpret it their way, Andrew Adonis his way, Lisa Nandy and Caroline Flint their way.  If you’re happy with that, fine.  But if you’re not, tomorrow is a day to think hard before voting Labour.  More on this in the final section below.

The Brexit party is as transparent a scam as has ever been perpetrated.  In fairness, you have to admire the sheer chutzpah of Farage saying “vote for me first and I’ll publish my manifesto after the election” – and romping to the top of the polls on the back of it.

But, as Northern Umbrella pointed out back in February, it is only succeeding because the people are now willing participants in the con trick.  Like TV wrestling, they know it’s not real, but they’re going along with it anyway.  Support for “Just get on with it” Brexit has long since lost any contact with reality, and is now just pure self-indulgence.

25,000 jobs can go in a day with Brexit clearly to blame – and with it the end of steelmaking in the North, a whole industry central to the North’s former industrial greatness – and yet for the “Just get on with it” brigade it won’t make a blind bit of difference to how they will vote.

It’s a fantasy bubble that has blown up over the last three years perhaps because of, as much as in spite of, the facts piling up that “have your cake and eat it” Brexit was not on offer.  But instead of bursting on contact with reality, it just morphed into the fantasy that a “clean break” Brexit is doable and won’t be any trouble that we Dunkirk veterans can’t handle.  It’s a bubble that was given new life by the deadline extension granted by the EU on 31 March, and it has not been pricked in any way by this election campaign.

Fox in the (chlorine-washed) chicken house

It is said that a people get the politicians they deserve, but you would have to have a heart of stone not to laugh at the incredible – but unstoppable – prospect of the North West’s “Just get on with it” gammon getting the Revolutionary Communist Party’s Claire Fox as their anointed representative.

There cannot be many Brexit party voters in the North West who don’t know by now that Claire Fox wouldn’t condemn the IRA bombing of her own home town of Warrington.  They are ignoring it through the power of cognitive dissonance.  But quite a few will still be unaware of how weird she really is.

The RCP of the 1980s was to all intents and purposes a cult, and had all the weirdness that goes with that.  It’s difficult to say what Claire Fox and the other RCPers really believe these days, but it appears to all intents and purposes that the core group of cult members still exists and acts as a collective.  Whether or not they still think they are overthrowing capitalism, it seems plain that they think they can play Farage and the Bad Boys of Brexit to their own advantage.  Meanwhile, the Bad Boys think they can play the RCP.

So far, so banal.  But also, and far more sinisterly, the RCP think they can play the Koch Brothers and the American dark money.

The American vampire capitalist dark money, which is so obviously funding the Brexit party through undeclared £499 PayPal donations, cares literally not at all for the welfare of the North of England or its people.  But they certainly have an interest in us.  We are there to be used as a pawn in their geopolitical game, and as a population that can be bled dry for cash, then thrown away.

Their main geopolitical game is to try to destroy the EU, and thereby remove as the only world force capable of showing the American people that there is another way.  But, on the business side, to them we are a population there to be used and abused as they ram through the privatisation of the NHS to American healthcare corporations, and open up our kitchens to their factory farm corporations, and all the hormone-fed beef and chlorine-washed chicken you can stomach.

You can help support efforts by investigative journalists (such as Peter Geoghegan of Open Democracy)  to get to the truth of who is funding the Brexit party, here.  Whatever you donate, you will certainly get your money’s worth when the truth comes out, because it will more sensational, and horrifying – and absurd – than you can imagine.

What is to be done?  Northern Umbrella’s tactical voting picks

In the face of this absurdity and darkness, it is too easy to despair.  It is also too easy to say brightly, don’t despair, vote tactically for the LibDems, as if it wasn’t the LibDems’ enthusiastic adoption of deep austerity that is the main root cause of this Brexit mess in the first place.

Nevertheless, turnout is everything in an election like this, so GET OUT TO VOTE.

Unlike our lucky friends north of the border in Scotland and west of the border in Wales, this is the only chance a Northerner gets to vote in an election that isn’t run under the first past the post system.

Although the party list system and single non-transferable vote used for the Euro election is a terrible version of PR (chosen deliberately by Tony’s Blair’s Labour party to benefit themselves and discredit electoral reform), it is a proportional representation election, and so there is a clear temptation to say, just vote with your heart and give your vote to your first choice.

However, in the North, there certainly is a case for judicious tactical voting.  The Best for Britain polling numbers translate into forecast seats as follows:

Lots of tactical voting advice is out there but Best for Britain’s Vote page allows you to test your own options using sliders – try it out.  A hat tip also to the info put out by Democratic Audit and Brexit Factbase.  Meanwhile, Northern Umbrella’s advice is as follows:

Across the North, a vote for Change UK is a wasted vote.  Change UK has been a hubristic yet lacklustre shambles from the start.  Let’s use this election to kill it off.  Their supposed big beasts can eat humble pie and then go crawling to the LibDems to let them in.  It will do them good – especially the Labour contribution to Change UK, who are a far less attractive bunch than its Tories.

In the North West, tactical voting is relatively easy.  Labour and the Brexit Party look comfortable to win two seats and the LibDems to win one, so it looks like a three horse race between the Green Party, the Tories and the Brexit Party for the final MEP seat.  Therefore all Remain tactical voters should give their support to the Greens, to get their experienced and effective campaigner Gina Dowding over the line and elected.  What a great breakthrough that would be for Green politics, and for saving the planet.

In the North East, where only three seats are up for grabs, the numbers show that Labour can comfortably win one seat but will struggle for two.  If you are inclined to vote tactically, the best chance to deprive the Brexit Party of two seats is to vote LibDem.

In Yorkshire and Humber, the top two Labour candidates are Richard Corbett and Eloise Todd, and probably there are no two people in the country with better anti-Brexit credentials.  Eloise Todd, who spoke to Northern Umbrella last July, is in with a sniff of getting a seat, and tactical voting would help her.  As Chief Executive of Best for Britain, Eloise has worked her socks off to stop Brexit, and Yorkshire could not elect a better or more well-qualified MEP.

But for Eloise Todd to do this, she will probably need to squeeze out the Green Party’s “magic” Magid Magid (last year’s superstar Lord Mayor of Sheffield) and the Yorkshire Party’s Chris Whitwood.  Which would be a shame.  It would be good to see either Greens or the Yorkshire Party break through – in the table the Yorkshire Party are hiding in ‘other’ at 5%. Even though 5 or 6% wouldn’t win them a seat, it would represent a breakthrough on a journey to give the Yorkshire a progressive, civic regionalist force something like its own version of Plaid Cymru.   Too difficult – no recommendation.

An update will be posted here when the results are announced on Sunday.

This entry was posted in Uncategorized. Bookmark the permalink.

2 Responses to The European elections in the North